You know that feeling, of the project that has been on your stovetop for a long time, but never quite made it to the front burner? PEOPSSONGS was that for me. Begun in 2011 and then tabled through almost five years of touring and then starting a family, it began to seem as if I would never get around to it, and that if I finish it soon it would never get done. Enter the Rensing Center. Tipped off by a friend and previous Rensing resident, I applied and was accepted for a summer residency. For three weeks, I could indulge the fantasy that I had no responsibilities, family, or life outside the library (AC helped) and focus on the blank slate and the blank page.

The artist Fly is one of the most prominent graphic artists to come out of the '80s/'90s Lower East Side squatter scene, documenting punk bands, the Tompkins Square riots, and the drifters, visionaries, and charlatans passing through that world. Her longest-running project is a series called "PEOPS": single-page, head-and-shoulders portraits of the characters and scenesters she's met, surrounded by transcriptions of her conversations with them during the sitting. A few are well known – Lydia Lunch, Art Spiegelman, John Zorn (who says "Her visions should be read every morning instead of your daily newspaper") – but most are anonymous members of what used to be known as the underground. 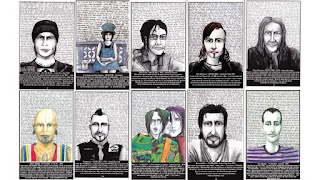 I went through Fly's archive, selected thirty of her portraits, and edited their words to provide a text for a song cycle. In keeping with the radical populist communitarianism of the artist and her subjects, the cycle was to be for a capella groups of any size, choral & polyphonic in the style of Eastern European village song or southern Sacred Harp singing.

I pretty quickly settled into a routine - a long early-morning run on the Doodle Trail in downtown Pickens (only possible before the heat really sets in), an hour or so of piano exercises (I'm also trying to get my hands back in shape for some upcoming shows in the fall), and then down to work, either on the spinet or the library pump organ. The pump organ, because of the sustain, was particularly handy for writing choral parts. When I hit a wall I'd enter the pencil scratch into Sibelius (a computer notation program) in the hopes that hearing even a tinny MIDI version would nudge me toward the next section. Failing that, lunch.

Around dinner, I'd put in a few hours of garden work: trimming hedges and kiwi trees, weed-whacking, and, mostly, battling wisteria. I think I'm going to have a kind of PTSD about wisteria.

The other residents and I didn't get out much, but I can recommend a couple things: for swimming, Devils Fork State Park (about 20 minutes away); for 75-cent pool and cheap beer, Smitty's on Moorefield outside of Pickens. There's a fancy new Goodwill in Easley. Definitely check out the old-time and bluegrass music on the third Saturday of each month at the Hagood Mill. And for random junk and lots of used guns, the Wednesday flea market (I picked up a silver-dollar belt buckle and a new used Swiss Army knife).

In theory, I've told myself repeatedly this month, there's no reason I shouldn't be able to get this kind of work done at home. But in practice, of course, a substantial creative project sometimes requires time bracketed off and set aside with no distractions or excuses (procrastination, of course, still worms its way in). Many thanks to Ellen and the Rensing Center for providing that time.

Posted by Rensing Resident Artist at 1:03 PM No comments:

Here is the story of our goat cheese-making adventure, told mostly through photos (I am a photographer, after all). Special thanks to Ellen for hosting, Pam, John and Chad for all the detailed information and the rest of the attendees for being so open and present. It was quite a day! 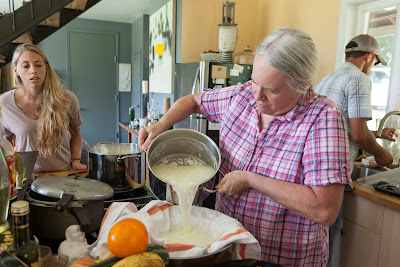 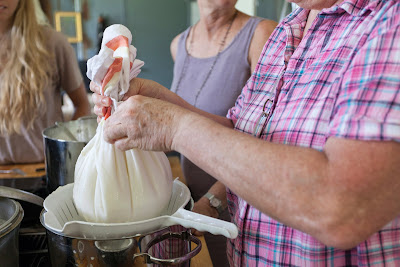 -Jodie
Posted by Rensing Resident Artist at 12:31 PM No comments:

I can't believe how fast time has passed! It seems like I just got here, but it's been over 2 weeks. I'm in love with the Pottery and wish I could transport the space and its view back home. The giant work area, the concrete floor - it's such a great studio space. I've been more productive than I could have imagined, and I've still found time to bake my first blueberry cobbler, learn how to make cheese from John and Chad (more on that in a separate post) and play some pool at a local bar (75 cents a game!).


Every day is full of making, thinking, reading and more making (with the occasional trip to visit Bob the Cat in the library). I'm finally getting better at the cyanotypes and fixing some issues with the process. I'm drawing as well, which is NOT my media. Who knows if they'll ever see the light of day, but it's good to stretch, right? Stay tuned for images from the big cheese day, and the best photo of Bob ever taken (if I do say so myself).

Posted by Rensing Resident Artist at 9:20 PM No comments:

When I was a child, The Secret Garden was my absolute favorite book. I've lived in cities most of my adult life, though, and haven't had an actual garden since I was a little kid. Plus, bugs tend to freak me out, mosquitoes LOVE me, and it turns out it's really hot in South Carolina in July! So I didn't realize when I applied to be a resident here at The Rensing Center how much this place would inspire me to tend to the earth around me. Despite the heat and the friendly mosquitoes, every day I find myself out behind the Pottery or on the Alder Creek trail, watering things, weeding, or clearing the path to the waterfall. It seems I've fallen for this little patch of earth.

Last night I sat on the back patio of the Pottery and watched the thunderstorm come in, and recorded some sound. Yesterday during the day I made some cyanotypes in the midday sun and did a little drawing. The day before I wandered in the woods and photographed. I came here without much of a plan, and I'm trying to let myself explore and try new things without the pressure of making a whole new body of work. If I start to think too hard about where it's all going, I walk down to the library and hang out with Bob (the library cat). I've got three more weeks here, so maybe I can just wait and see what happens!

Posted by Rensing Resident Artist at 7:17 PM No comments: