The Rensing Center - a Blog


My residency in the late fall of 2016, is not my first visit to Rensing. It was, however, the first visit with purpose. I am a smith and a writer … in that order. I left the smithing at home, although I confess to bringing my favorite forging hammer, just in case the writing proved too hard or the itch became too severe. G.C. Waldrup, poet and guardian of the residency program agreed with  Ellen Kochansky, the creator and director of Rensing, agreed that I should be allowed to attend  as a ”‘craft elder,’ to do whatever he wants.” What a gift! 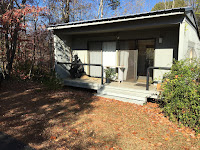 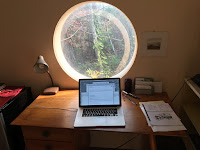 The year to date had been long, hard. Too much work, an impossible schedule, dogs to be walked, the cares of a very rural home, wood for the winter, the hawking of wares and filling commissions. I had planned hours hunched over the computer in the morning, teasing a memoir to paper; long walks in the woods after lunch; photos of landscape, beast and sky; evenings lost in the words of others from the Rensing Library or from Evelyn’s (Ellen’s ever interesting and knowledgeable mother) personal shelves.

There was some of all of this. However, I realized I was dead tired from my year; exhausted in a way I had not felt since teaching in a private school some forty-five years ago. I gave myself permission to float in the gift of time. I did write (some four more versions of the current chapter); afternoon walks more often became naps restoring the synapses of body and brain; and reading often became conversations with Ellen and Evelyn or Ron or Pam or Chad, or Jon about where we as a nation of immigrants, as a people of good will, must head or lead from here.

I came to work within the rural time frame; with the pace of life dictated by seasons and sun; to slow myself down enough to think, to consider, to talk slowly and carefully. To converse with the goats while parceling out animal crackers. To watch the sun set through the big oak behind Evelyn’s house. To watch Ellen deftly shift from Director to Chef extraordinaire, with shrimp bought that morning at the Flea Market, or chicken, or a medley of vegetables too good to leave behind. Candles lit, a gentle presence, careful words, considered thoughts, truths we know in our bones and then rush on by … and, as I write this today, all lulled or washed by a gentle and long over due rain for Upcountry, South Carolina, stilling the beast of fire, while feeding the land before the big freezes. I accomplished little tasks for my “work time.” Repaired leaky hoses; a railing  for Evelyn across from the Guest House; a new latch on the Well House. Restorative chores intermixed with a deeply restorative sojourn amongst people of depth, of thoughtfulness, dedicated to the land and its healing and to people doing the same.

The hand, fingers up, a universal sign of welcome,
equals Rensing.


Posted by Rensing Resident Artist at 11:39 AM No comments: