It Was a Busy Sabbatical

Ellen Kochansky, Executive Director
It Was a Busy Sabbatical 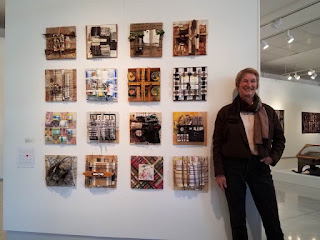 (Above:  Ellen Kochansky with her artwork at Clemson University's Lee Gallery.  This invitational exhibition was called Upstate 8: SC Fellowship Women and was part of the South Carolina Arts Commission's 50th anniversary.)


After five years of non-stop Rensing Center residency administration work, I was anointed by the board with a sabbatical.  Countless others have found their serene place here at Rensing, reframing their outlook and their work by watching the goats and the waterfall. I did too.  Since September 2017, the critical priorities have presented and arranged themselves into a new and clearer form, with my mother's needs, the opportunity to make new art, and some traveling to visit my friends and family taking center stage. Perspective, the reason we chose to look at life from the small village of Borseda in Italy, has appeared in Pickens. As those priorities became clearer, I remembered how artwork falls into place when we squint.  I call this VALUE JUDGMENT, and I've given this lecture often.  Here was my chance, in the nine month gestation period, to give the note to self! 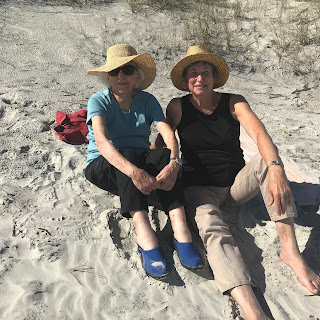 At a Penland funeral for the icon Paulus Berenson, old friends came through with just what I needed.  Bobby Kadis asked me, "How's that Rensing thing going?"  I said, "After five years and 84 residents from nine countries, I'm exhausted. I need a week at the beach!"  He said, "I can do that for you."  Nol Putnam, my mother, and I had a glorious rest. 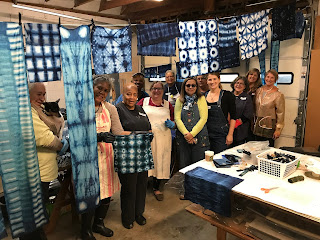 The undercurrent is that Rensing's best and most compatible alumni and friends stayed in touch, and my choice to anoint a group of Rensing Fellows turned out to have been a good one.  These fellows were given first dibs on the single, summer session for 2018, and they all said "Yes!"

Many other wonderful things have happened including the return of Catherine Cross Tsintzos.  During Catherine's May 2017 residency, she planted indigo on the Rensing farm.  She returned for a harvest and dyeing celebration on Saturday, October 28th, teaching a sold-out workshop on growing South Carolina indigo, bundling, folding, clamping and exploring the vats of blue dye.There was an exhibit of examples, reading/study materials in the Rensing Library and a festive spread in the gallery space with celebratory snacks and glorious florals by board member Ron Few. 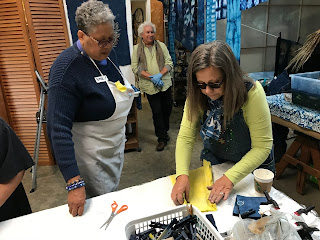 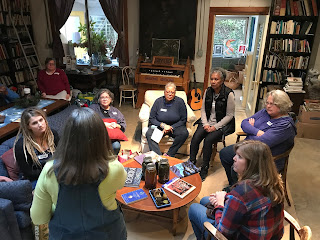 Catherine returned to the Rensing Center on January 28th and 29th to teach "The Art of the Page", another wonderful workshop where so much creativity was unleashed. 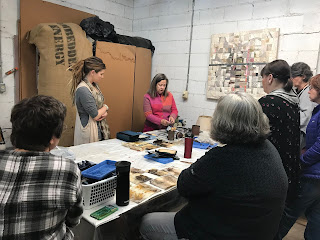 Participants for these two workshops came from all over the country.  They contributed to the life and mission of the Rensing Center but also made their economic impression on the local community.  Many hope to return and bring friends, spouses, and other artistic types.  These were the most profitable workshops held at the Rensing Center and promised a new potential for us. 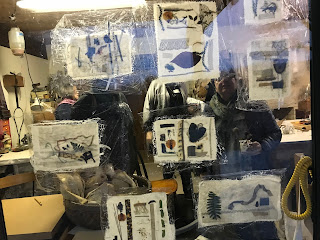 As the new summer session began in May, the Rensing Center partnered with EMRYS, a Greenville literary society, to host the winner of their chapbook award for the second year in a row.  Dr. Mary Moore, Professor Emerita in the English Department of Marshall University, was this year's winner. 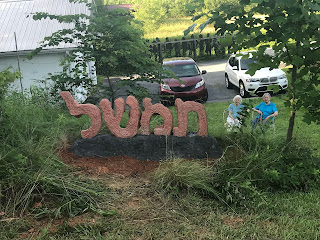 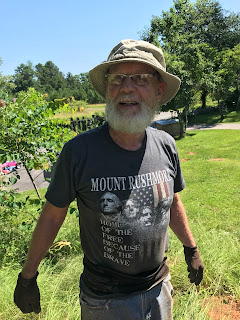 Dr. Keith L. Andrews says of his sculpture, "Human have always been uncertain of the relationship between our free will and the great forces that impinge on us.  In Genesis 4:5, Cain was told that he must meet sin (or was it disobedience or ignorance?) Depending on the translation of the Hebrew word timsel, Cain was either being commanded to overcome the challenge or was being reassured that he would confront it successfully.  In East of Eden by John Steinbeck, the translation from Hebrew is "Thou Mayest". 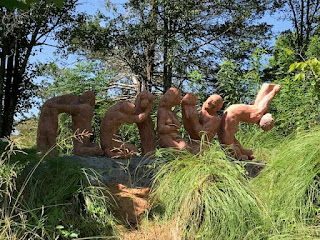