Thunder and Peaches and Birds

Betsy Andrews
Brooklyn, New York
July- August 2018
Thunder and Peaches and Birds
Betsy Andrews here. I'm a poet from Brooklyn, and I've been here at Rensing Center for three weeks, working on my new book-length poem, Crowded. It's the third in what will be a quartet of books based on the elements. New Jersey was the earth book, an anti-war meditation on the New Jersey Turnpike. The Bottom, an elegy for the ocean, was the water book. And this one, Crowded, is the air book because, well, it's crowded up there: drones and planes and particulate matter crowding out birds and bees and butterflies.

It's been gorgeous writing here on Pickens County, with its thunder and peaches and birds. Here's a visual diary of my time here, a hint at the beauty of Rensing Center, the community Ellen has built around it, and the deep, deep green of Upstate South Carolina.

I write about food for a living, and one of the journalistic tasks nagging at me when I got here was a big knife skills package I had to deliver to an editor in the midst of poetry-izing (luckily, I had done so much legwork ahead of time, it was just a matter of polish to get it out the door), so Ellen's beautiful knife here impressed me. I believe she picked it up at the Pickens Flea Market, a sprawling phenomenological happening on Wednesday mornings on the road into town. 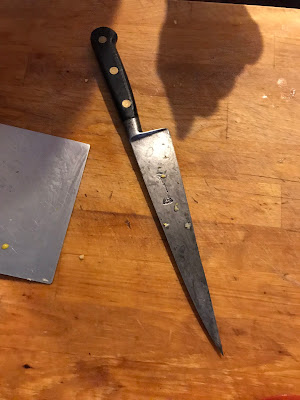 There's an exemplary bratwurst to be had at that flea market, by the by, deeply flavorful. Who cares if bratwurst isn't exactly Southern? Get it with the works. 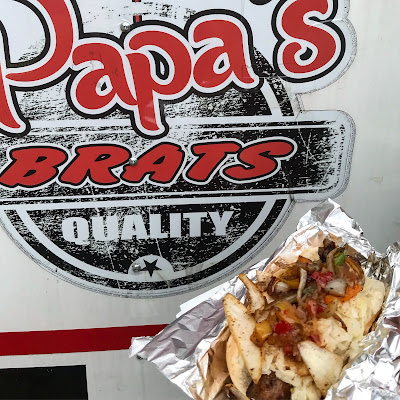 Even more impressive are the enormous head-on shrimp that get driven five hours from the coast in the wee light of dawn. Here's what I did with them. It was only days later, when Ellen rummaged in her greenhouse, that we found a little kettle grill, so for these guys, I got a bucket and a grate and grilled and ate them shell, head, and all. 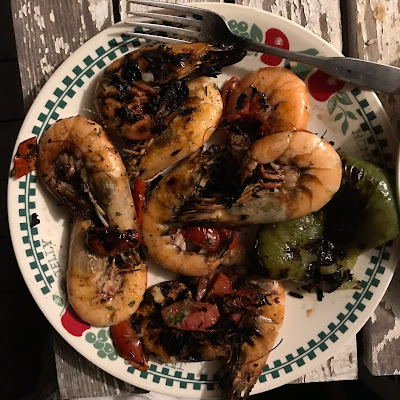 But I was not here to eat. I was here to write, and write I did, in this sublime spot, in the middle of the weather, me and a zillion fascinating flying bugs. I kept a tupperware and a magazine to catch any that leaked in and show them back outside where I figure they're happier. 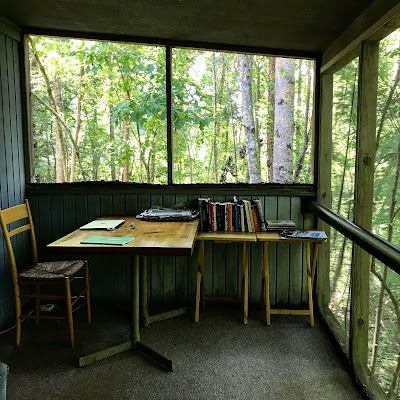 Hiking brings me material, since what I'm writing is ecopoetic, steeped in our relationship to the natural environment, and witnessing to its genius and our troubled dealings with it. So I hiked a lot. Here's a water hole I dipped into at Keowee-Toxaway State Park on a lovely, muggy day. 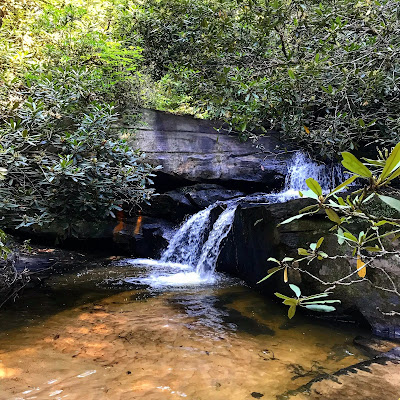 Once a month, they grind grains on the water-powered historic Hagood Mill. There's bluegrass and crafts, and this beautiful collection of old millstones in the millstone graveyard. 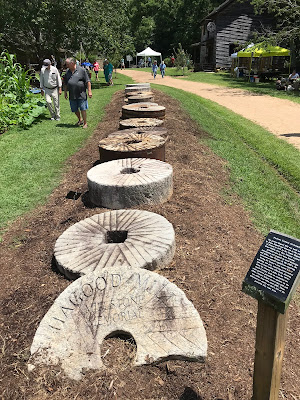 We went right from the mill to the Soapstone Baptist Church, which was holding its monthly fish fry, a fundraiser for the upkeep of the historic freed black cemetery and the future restoration of South Carolina's first African-American schoolhouse, right next to the church. Church deacon Mabel Owens Clarke has used her prodigious culinary talents in a mission to preserve the history and culture of her ancestral Little Liberia, a freed black community established here after the Civil War. 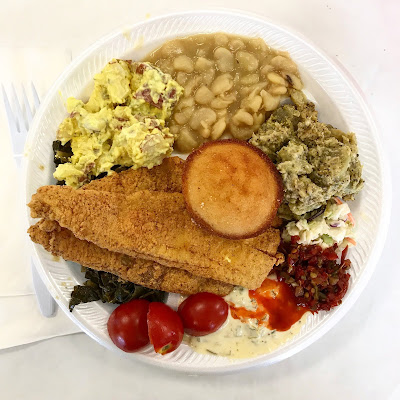 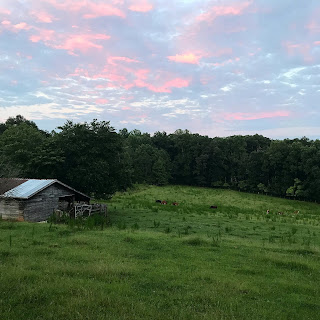 Gifts from the garden appeared on my porch: potatoes and onions here, along with a big juicy melon and a pile of peaches of flavorful profundity from the Pickens Flea Market. 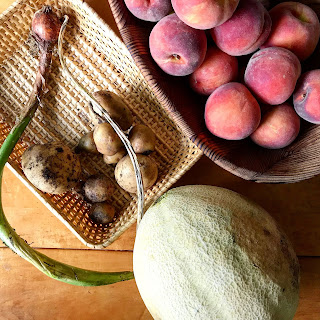 It is hard to over-estimate the impact of peaches to Pickens in summer. Ellen and neighbor Ron got wind of a low-cost 100-pound haul they could pick up from Clemson University's experimental orchards, and they were processing peaches (yes, a gift of peach slices ended up on my porch, too) for days. 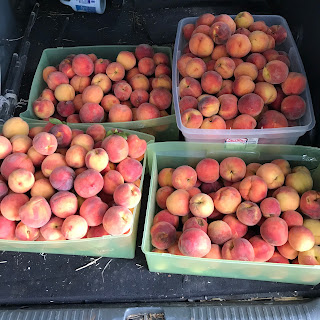 One of the natural marvels nearby: Twin Falls. If you're not a real hiker, it's an easy walk in, and there's a massive water hole right before the cascades. You'll find the parking area on Google Maps. 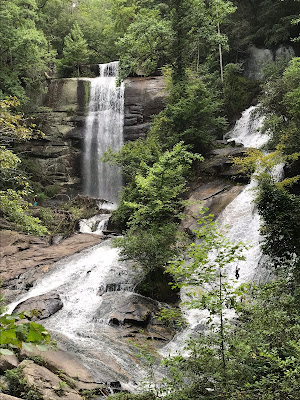 My 55th year came around on July 24th while I was here at Rensing, so I did what I always do on my birthday: I cooked for friends. A Greek feast this year, with grilled lamb (Ron used pine cones for fire starter), hortopita, tzatziki, taramasalata, Greek salad, thyme-roasted potatoes, dolmades. 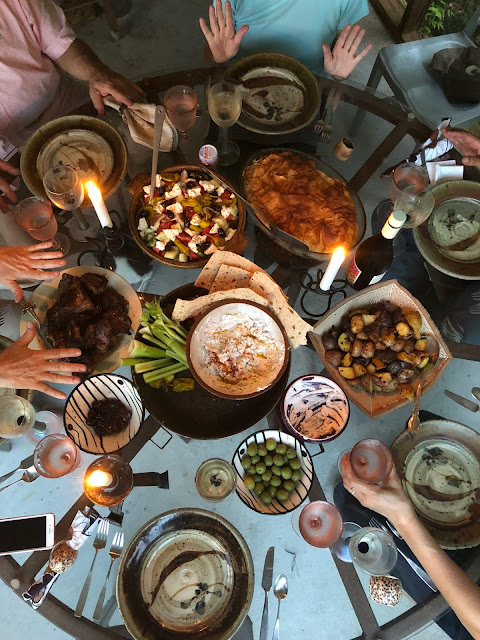 Shopping for that birthday meal, I stopped in at a place that Ellen had told me about: The Pita House, in Greenville. It's an excellent Lebanese shop and restaurant, take it from someone who writes about these things for a living. Also great: Swamp Rabbit, on the way into Greenville from Pickens. Best natural, organic, biodynamic wine selection in these parts, for sure, and great local farm produce. Not cheap, but worth it. 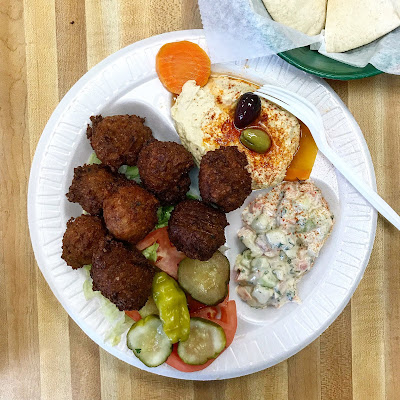 Medicinal plant workshop at Rensing Center, with genius herbalist healer Amanda Dilday. "What's the pain telling you?" she asks. "The plant might have an effect on the way you move through the world, so if you're not ready to heal in your whole life, maybe don't take it." Good, holistic advice, but I feel ready to heal in my whole life! 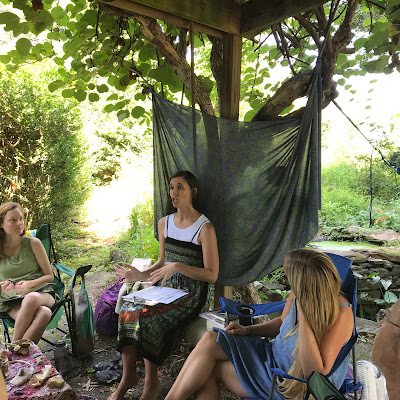 Another super-duper easy place to walk (and bike, if you have a bike) is the Doodle Trail, an 8-mile path along the former railroad route between Pickens and Easley. The route bisects all sorts of different landscapes, from creekbeds to suburbs to farms and modern-day ruins, as shown. A young red-tailed hawk swooped low, screaming at me, nearby. 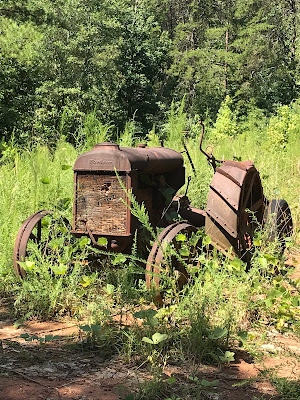 One bonus of the Doodle Trail: About a mile in from the Pickens parking lot is Aunty's Anne's a meat-and-three with superb fried chicken: steamy, tender inside and crunchy, salty out. Same goes for the fried okra. 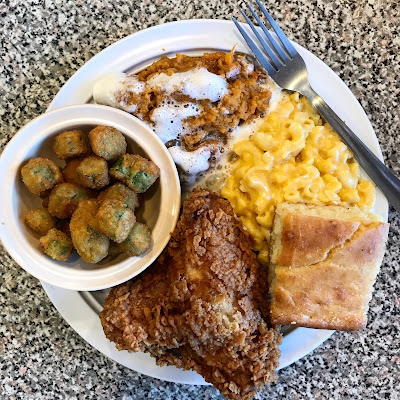 A more-serious hike: Eastatoe Gorge Trail. It's 6 miles round trip from the parking area inside Jim Timmerman Natural Resources Area at Jocassee Gorges, down a little-traveled, but expertly designed trail (mild grade, stairs at curves of switchbacks) to the creek, where I dunked in this luscious water hole. 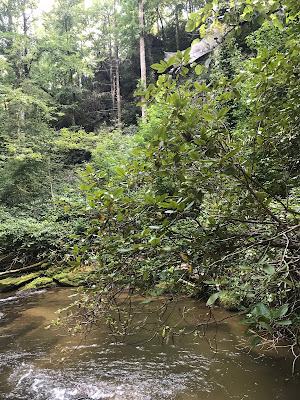 Music night at the Appalachian Ale House! Kind of floored at the talent in these parts. People are plant experts or artists or amazing cooks or musicians. A whole bunch of guest players jumped in, including that guy with the bald head in front of me! He plays a mean upright bass. 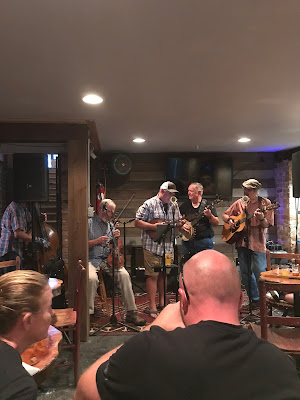 But my favorite was this gal, the one woman, and youngest player, of the night.

The evening was a tribute to Mr. Robert Perry, longtime local moonshiner (he ran the still at Hagood Mill), bucket bass player, and host of a weekly pickin' and grinnin' at his Perryville, a town he built on his property for the purpose. I was lucky to meet him and his insanely cute dog just before he left this world at 78 on July 26. 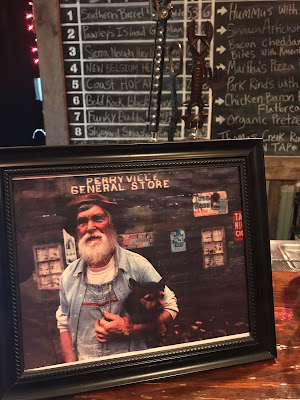 Can't come to South Carolina and not eat BBQ. Happened to be a Wednesday, and choices of smokehouses are limited mid-week. Most joints are Thursday to Saturday. But I found the smoked babybacks delicious at The Pompous Pig in Anderson, and the sides were tasty too. Best cornbread I've had here, for sure. 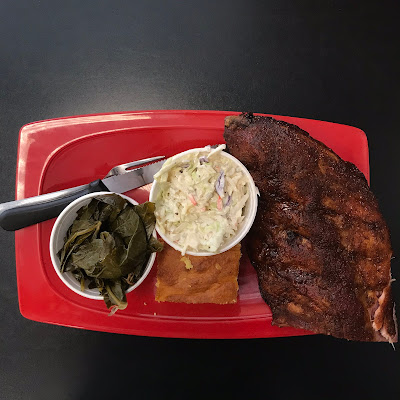 It may seem like I didn't write a lot here, but I did. I just don't take selfies. So there's no shot of me crinkling my brow and composing some ferocious lines. I will leave you, though, with this poetic image of the Blue Ridge fading into the bumpy, blue distance, as seen from the top of Sassafras Mountain. 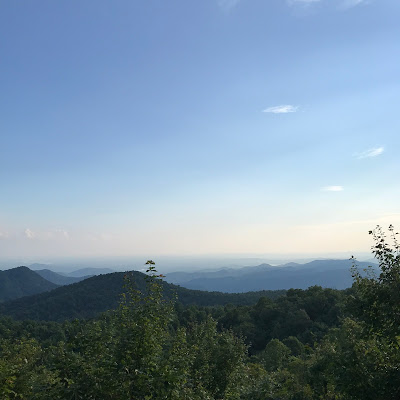 Posted by Rensing Resident Artist at 7:56 PM No comments: