They Came, They Chopped, They Poemed & Pickled

On Saturday, February 6, 2016, the last day of my four-week residency at the Rensing Center, director Ellen Kochansky and crew hosted a community workshop called CABBAGE POETRY in my “home away from home”, the Pottery studio. Though I am not a potter, I was able to throw myself into my work in this open and inviting space while on my retreat. I worked deeply into my writing project, a theater adaptation of the correspondence of American poets Denise Levertov and Robert Duncan. Now I was making my transition from solitude and internal action back into my “civilian” life as mom and wife. I needed a good transitional ritual, and a workshop in devised poetry mixed with natural fermentation should be just the ticket. 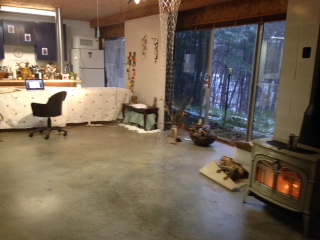 At 8AM I built a healthy fire in the woodstove to warm the space for the dozen people who would be attending the 10AM-2PM workshop. This woodstove and I had bonded during my stay. Any of you who use woodstoves for heat know about that special hearth relationship, kind of like keeping a writing project alive, where you are always aware of the condition of your fire, always calculating when the next log should be added. Rule #1: Do not burn out! Tending the fire. Feeding the flames. Not wasting wood by carelessly sacrificing logs haphazardly. Blowing on the coals to seduce out as if by magic new flames to feed on a new log.


Gradually the others arrived. First came Clemson history professor Pam Mack and her daughter, Elizabeth Mauer. They were leading the fermentation workshop. We set up folding tables and cleared surface space in the kitchen, laid out salt and cabbages and bowls and knives. Katie Nocella, the assistant to the director for the Rensing Center, brought quiches and salads for our lunch break. John had brought some roasted wild boar - culled locally, for delicious tacos carnitas. Director Ellen Kochansky and her 95-year-old mother, Evelyn Rensing Kochansky, for whom the center is named, arrived and made sure nothing was wanting or needed. We fashioned a cabbage centerpiece and two long lettuces in vases for the table. 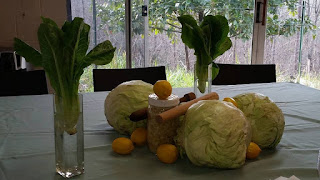 Voilà. We were ready.
With a title like CABBAGE POETRY, I expected this event to have a certain Dada-Meets-Sauerkraut flavor, and I was not disappointed. My fellow resident artist, writer Abby Minor, had given some hours of her precious retreat time to patiently cutting up tiny words from catalogs and placing them in little envelopes for us. We each got an envelope of tiny word bits, a section of old faded blue, green or brick colored cardboard folders, a bit of white glue in a cup, and a paintbrush. And time. 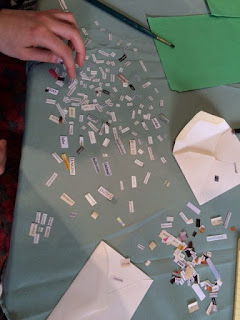 We sat on the four sides of the doubled-together folding tables covered with a green tablecloth - 3 x 3 x 3 x 3 – and we created poems from what we were given. As in life. We all wanted more time. Abby was a benevolent poet-fairy and granted it 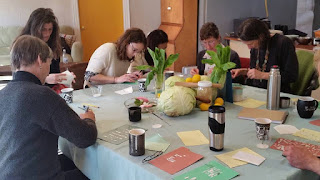 Afterwards, we read our poems to each other, in no particular order. I wrote two. Here is one: 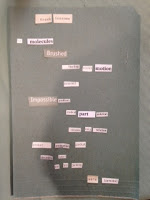 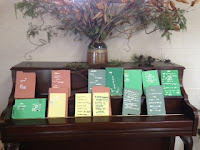 The poems were set out to dry on the piano.

Then the rest of the morning was spent chopping and salting our cabbages, 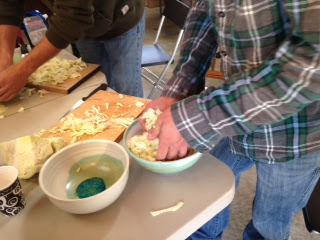 And then hand crunching them to squeeze out the natural liquids, as daughter/mother Elizabeth and Pam supervise. 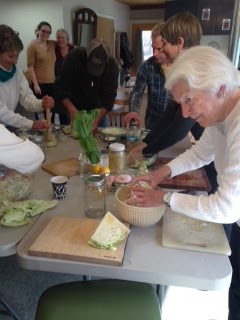 And then stuffing them densely into glass mason jars, making sure they were covered with brine. 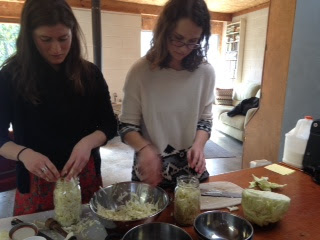 After lunch we made Jun tea, a fermented green tea and honey. 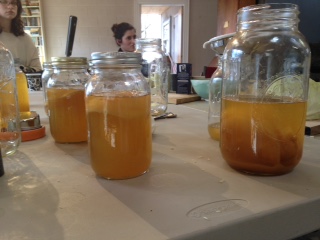 Ellen showed us how to make pickled lemon rind. 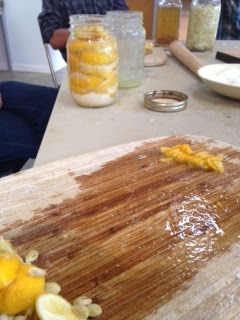 Throughout we listened with fascination to the knowledgeable narratives of Pam and Elizabeth as they shared simple, old-fashioned methods of making fermented foods based on their experience with the natural fermentation process popularized by Sandor Katz. We learned about scoby (Symbiotic Colony Of Bacteria and Yeast), dead yeast, and that we were all covered with loads of bacteria that could pickle just about anything.  I never realized how much fizzy fun bacteria could provide!


After everyone left it was quiet in the Pottery. I knew it had successfully made its transition back into a communal Rensing Center space again. I was ready to pack my car to the gills and head back to Asheville. The Pottery was ready for the next resident artist to arrive: Kathryn Field, a visual artist coming from New Hampshire. And the next who would follow her. And the next. The tiny word bits would form new poems and the natural fermentation processes of creativity would symbiotically colonize new art scoby in the briny generosity of the Rensing Center. 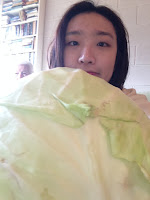 Posted by Rensing Resident Artist at 12:31 AM No comments: 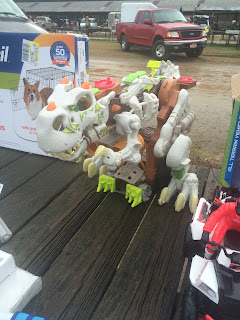 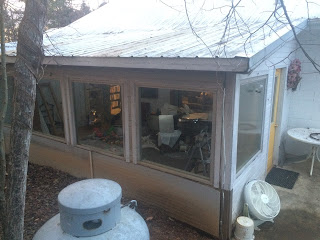 This is the porch of the Rensing Center, which was turned into my studio. Inside, I have been making paper, cardboard box using found, recycling materials (Ingles newspaper, Ellen's box of her historical records, the waste I have been creating at Rensing Center). 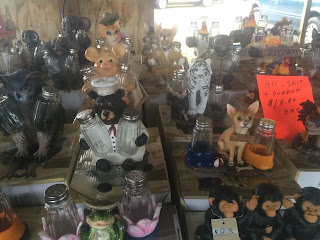 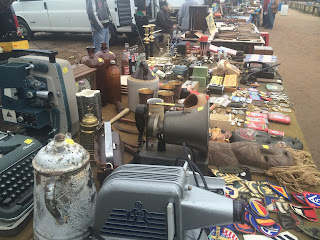 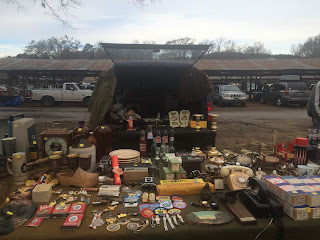 The placement and layout of the objects at the fleamarket reminded me of the way I like to paint on canvases. 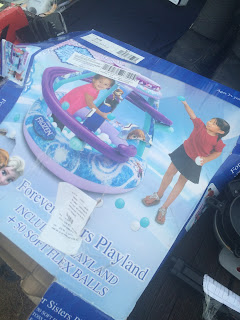 Posted by Rensing Resident Artist at 11:40 AM No comments: 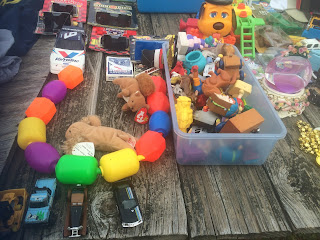 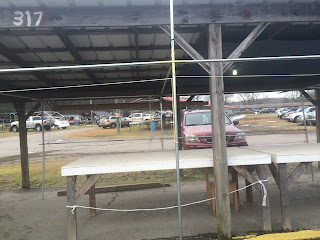 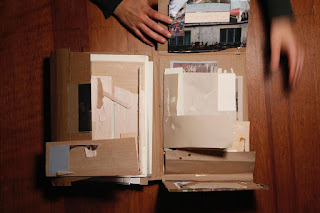 I arrived to Rensing Center a little more than a month ago from Seoul, Korea.

Every Wednesday monrings, Ellen would take us to the morning flea market, which was just about 10 minutes away from Rensing Center. I've been intrigued by the various groups of eclectic objects gathered by the local community. I was interested in how the objects seemed to have a sense of missing history and were laid out on the tables. The tables seemed to serve as a stage or a flatbed painting for the objects that could be easily played and moved around by the people looking through things to buy at the flea market. By the end of February, I plan to make a performative, interactive installation at the flea market by using the objects that I have gathered from the flea market and at Rensing Center.

-SO HEE KIM
Posted by Rensing Resident Artist at 11:24 AM No comments: