This Place Gives Me Hope

Brooklyn, New York
May 2019
This Place Gives Me Hope

A sampling of people I have befriended and broken bread with while on residency at Rensing Center in Upstate South Carolina: Mabel, the garrulous founder of the Soapstone Baptist Church fish fry and the anchor and preservationist of New Liberia, the historic black community established in Pumpkintown after the Civil War; Mike, the anthropologist, who has helped Mabel tell her deeply American story; Evelyn, who at 100 years old, remains the feminist intellectual and artist she’s always been, designer of buildings and teacher of children, courageous driver of golf cart despite her legal blindness; Jon, the landscape architect who knows every plant in the forest and field, and who’s been out and proud since his teens; Joel, mushroom farmer and gentle soul, and his partner, Tasha, who makes gorgeous wall hangings and fabrics with natural plant dyes; Ron, the retired antiques dealer whose cornbread is the most delicious in the state, and who seems related to everyone in Pickens; Amanda, the spiritual and herbal healer, who leads plant walks in Rensing woods. 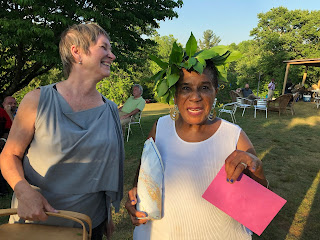 There are so many more: the moonshiner, the mathematician, the musicians who jam at the Appalachian Ale House; the brewer, the literary journal editor, the tattooed painter, the maker of shrubs, the food justice activist, the Clemson students who are digging at the plantation house on campus to uncover the lives of the black folks who were forced into slavery there. And, of course, there’s Ellen, maker of quilts of all kinds, including the crazy quilt that is the community that gathers for shared inspiration and solace—and potluck dinners—at Rensing Center, an oasis for humans on a country lane in Pickens. I mention them here because I have been so moved and educated by the artists and
progressives and visionaries I have met in Upstate South Carolina that my poetry has
flourished for the energy they have given me. In that corner of South Carolina where Pickens is,
people reside who welcome the crazy quilt of diversity and humanity that makes our nation, our
planet, a place worth being in and working on. As a political poet, an environmentalist poet, an activist poet, a poet of witness, I really couldn’t ask for more from a residency than to be reminded every day by the community that makes it, that with shared love and creativity, there is hope for us as a species on earth. This is what Rensing Center is to me. Lately some folks leading this country seem hell-bent
on hatred.. But there’s love enough to overwhelm them. I’m convinced of it. And I thank all the
Rensings everywhere for backing that assertion up.

Posted by Rensing Center at 10:32 AM No comments:


Last week, I left the Rensing Center. I’d been there almost a month, but left early to make
sure my house and wife and dog in New Orleans would be alright, as they were in the path of
then-tropical storm Barry. Barry left New Orleans pretty much alone, but when my wife
apologized for “making” me leave early, the first thing I thought about was how nature so rarely
takes our desires into account. A former professor of mine used to say that the most and least we
can expect from the natural world is apathy, and anyone who’s been made to feel small during a
natural disaster – even one that spares you – knows what that feels like. But even though I didn’t
leave South Carolina exactly when and how I’d planned, as with most things it all worked out
fine.
This is part of what I was learning – relearning – at the Rensing Center: a life spent
planning is often a disappointed one, and often the best experiences are not the ones we plan for.
My plan a month ago was to lock myself up in the guest house and spend as much time as
humanly possible on my novel. I did some of that, but now that I’m home, I find that much of the
value, much of what I took away from my time in South Carolina, was the time spent not
focusing narrowly on my own work, but paying attention to the broader world that surrounds me.
There’s something about being so tangibly present on the border between worlds that
helps me remember to look beyond the narrow plans I make, to question not only what they are
but why I made them in the first place. Sitting out on the screened-in porch, close but not too
close to the treetops and birds and bugs, and exploring the surrounding trails and towns and
lakes, helped me to zoom in as well as all the way out. This past month, I’ve spent more time lost
in the worlds of my own work than I’ve spent all the rest of the year, but at the same time,
somehow, I’ve spent a lot of time aware of the broader world that sustains me.
I mean this – sustaining – in the natural and physical senses. I sat under waterfalls and ate
peaches and blackberries exploding with the flavors of a southern summer sun, and I heard the
storms passing overhead and the cicadas growing bold again after they pass, and I spent shady
mornings pulling weeds and planting seedlings, then watching nature take over where I left off,
and in meeting and interacting with and learning from the other activists and artists and cooks
and farmers and open souls that are either naturally occurring there or else, like me, are drawn to
it. But I also mean it in a more spiritual sense, as the sustenance I get from being around all of
these influences does more than remind me of what I’m doing, but also why I do it. The Rensing
Center is a confluence, one of those places with more than its share of good things, like a spring
in dry land, like a cool, shady grove on a hot day – the place seems near to and completely
different from its surroundings, somehow more real because of it.
Here’s an example: a neighbor down the road, Ron, told me a story about his
grandmother, who would wash her hair in the waterfall – the same one we had just hiked down
to the day before. He described her sitting on a rock and letting her waist-length hair down, hair
he as a child had never seen out of its tight bun, and how she seemed a different person, down
there. This story has become part of my understanding of the center – it’s a place people are
drawn to, but also one where truths can be more readily be seen. I sat under the waterfall before I
left, rinsed my much shorter hair in the refreshingly cold water, sitting, probably, on the very
same stone she had used way back when Ron, a child, realized his grandmother’s hair wasn’t
always up in a bun. 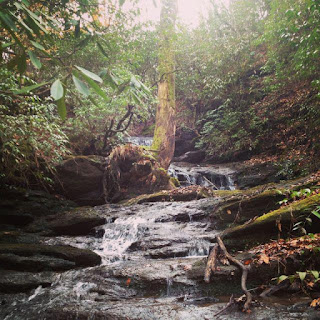 There’s something about that place that helps me see what I’ve always been looking at,
but more clearly. Maybe it’s perspective, the physical difference that comes from doing the same
or similar work in a different location, but I think it’s more than that. The Rensing Center is one of those places where you can focus narrowly, looking only at your own work, whatever it might
be, but it’s also a good place for escaping that work, and I think this is sometime undervalued
among artists. Being able to spend an entire day cooped up in a breezy, shadowy porch while I
do almost nothing except immerse myself in the world of the novel I came to South Carolina to
work on, and then the very next day going to a flea market with Ellen and Merrie, eating a
delicious lunch of shrimp and freshly picked mushrooms from the woods, planting seeds in the
garden and finishing the day listening to a bluegrass jamming circle and drinking local craft
beer…there just aren’t too manly places that can offer such nurturing, varied fare, and as always,
I’m grateful for everything in which I managed to partake, this past month. Thank you to Ellen
and Merrie and John and Ron and everyone else who helped to shape this summer into one of the
most reinforcing periods I can remember.
Posted by Rensing Center at 11:25 AM No comments: 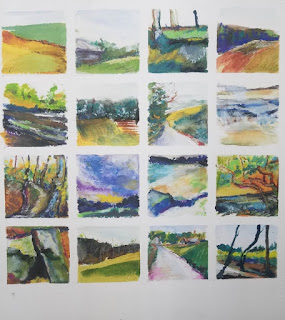 I am reading the blogs of the
visiting Rensing artists.
Each post is
a distillation of
experiences.
Each interprets a personal knowing of
the Thing That Is Happening.

There is a relativity of
perception, meaning, and feeling—
at once unified and complex—
a special Rensing Sauce that you
know the moment it is on your tongue.

There is a collective thinking
through diverse and creative makings.
Here, at last—TIME and SPACE for
contemplative energies
to emerge.

There is a healing in the trees…
A calling to be still as well as to flow all at once
inside this peaceful interface of land and water.

There can be evoked, as M.C Richards has observed,
a “waking up to the preciousness of life”.

To IMAGINE Rensing is
to translate a landscape.

To BE at Rensing is
to find your wisdom through composting
as you make new soil with
your ideas, artifacts, and food scraps.

VISIONS can be articulated and
futures cultivated through
a present-tense gardening of
community and the renewal of resources.
Posted by Rensing Center at 4:14 PM No comments: