Two Months at the Rensing Center: Towards a Radical Orientation (part 1)

Matthew Moore
Sudbury, Massachusetts
June- August 2016
Two months at the Rensing Center
A poet in the wind-up stages of manuscript revision can find, striving to bind the sheaf of poems under final orders, that what finally lets the binding set is a move or set of moves which move(s) against the grain of whatever thematic pattern or rhyme the manuscript pursues. Often such a move against the grain of one’s own work finds purchase in a tradition or A Tradition; preceding holds of value given shape and space by poets whose work in the past lends one’s own present work the ballast to jump-start the manuscript into the future of Poetry. The oratory and rhetorical hand-to-hand argument embedded at the level of the line in the inter-disciplinary poetry of the Black Arts movement has built, decade by decade, a wide foundational ballast for a range of contemporary poets working both in discrete lyric poetry that bears out the personality of a particular poet’s voice, as well as in experimental, voice-dissociative texts that benefit Poetry. That is one example of ballast that lets a manuscript book.

I have worked on a manuscript-in-revision for the past seven years, and although parts of the revision process have found ballast in a tradition (historical vernacular) it wishes to shake up, and in A Tradition it seeks both the enmity and audience of (modernist New Criticism), my manuscript has long sewn division against itself to a fault. A contrarian’s contrarian. The past two months have changed this years-long stalemate. I was lucky, in April, in the middle of a personal geographical free-fall, to find myself landed by and at the Rensing Center, an ecologically-driven, aesthetically-directed, happily anti-bureaucratic, artist residency in the northwest nook of South Carolina, in the town of Pickens. Pried loose.

Pickens is upcountry, as local parlance has it, a half-hour south of North Carolina, an hour east of Georgia. While that cartography is readily available knowledge, the cartography that has brought my work order and bearing is that of the Rensing Center itself, whose single road—on which the guest house I am honored to be a guest is set—is paved under the direct and clear-of-trees path of the sun and moon. So the day and night have both hurdle and hurtle for the work of poetry. So each day and night shows readily its obstinacy against difficult work as well as its dog’s pant that says keep running, keep your blood up, poetry. Alignment, orientation, not matters I thought would have a hand in the revision of my work. Nor did I think I would find myself as alert a reviser as I have been under the blatant sign and rhyme of celestial bodies and alongside the Rensing Center's animal and vegetable hierarchies. For example, the vine, wisteria, is the upcountry’s Lear, every green thing at its hand’s disposal, and it tarries about, furious with forgetting and waking, a blinding migraine for its human subjects. Or the belly-groans and bells of the goats that go off every four hours. The thunder is on clockwork, too, in the summer months. This manuscript is still making a mockery of my efforts, in many places. But not in this place. At the Rensing Center, the role I've been given the space to take on the stage of my toy I keep toying with is a name I can read clearly for the first time. You must change your orientation.

Wanrudee Buranakorn
Eau Claire, WI
July- August 2016
Wanrudee
Last month (June), I was an artist in residence at the Rensing Center again. For 3 weeks there, I took
photo shoots pretty much everyday (some days as many as 4 shootings). 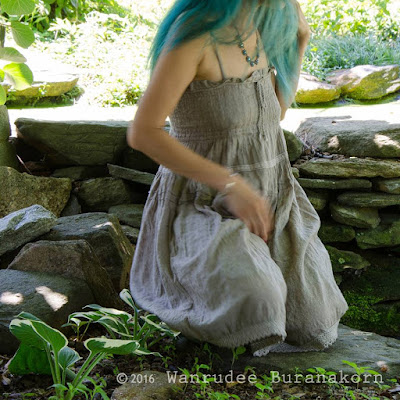 This pic was a test shot as I prep to shoot myself dying my hair in the garden (an awesome garden built by the awesome residency's director Ellen Kochansky). 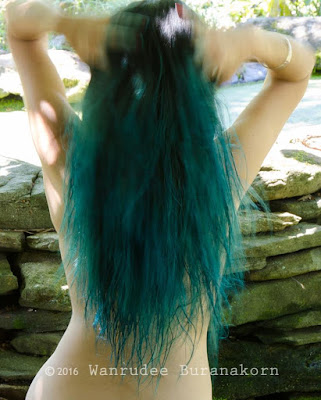 From a photo shot in the garden. Kiwi vines above what I call Shelby's gazebo shade strong afternoon sun and shine soft, even light to the subject. 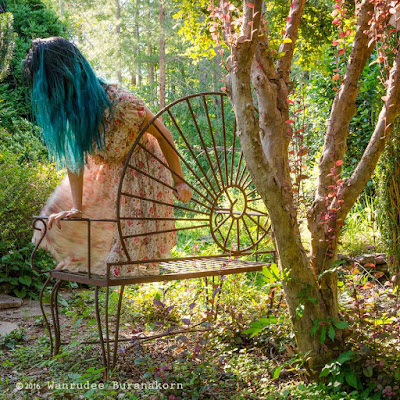 Morning Light in the Garden 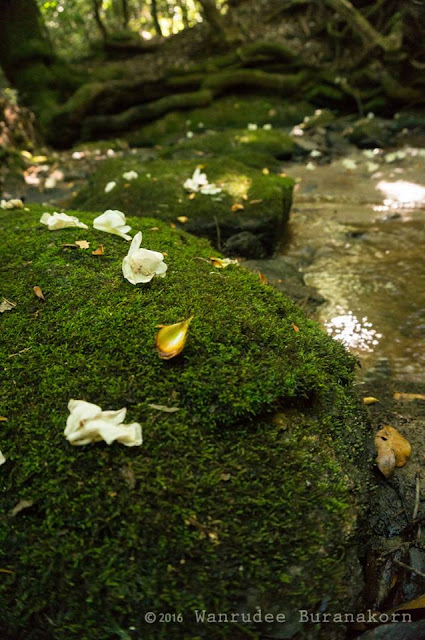 Rhododendron on Alder Creek (the waterfall trail). I walked this trail everyday to bathe in the waterfall. 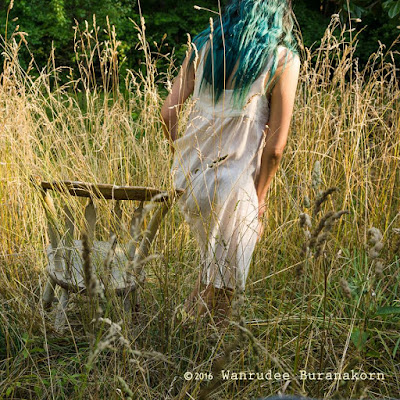 I could find beauty everywhere. Here's an image from shooting right outside my studio-- the pottery. 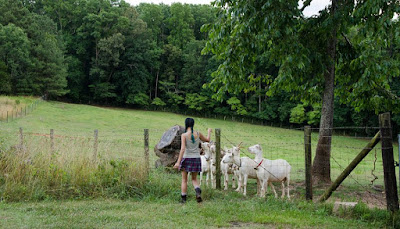 Feed the goats, my neighbors. 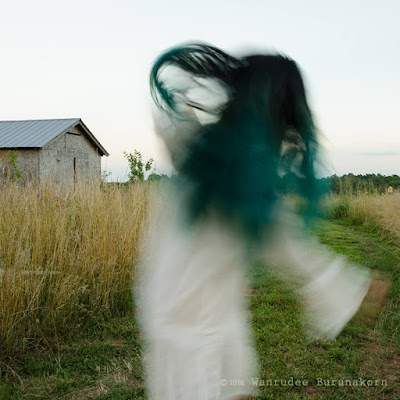 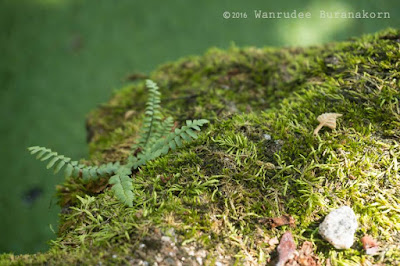 Magical landscape at the pond in the garden Another area of the magical garden, right by the Pottery studio 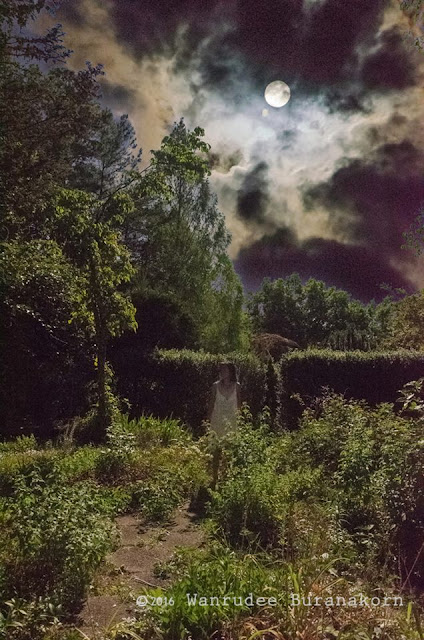 Last but certainly not least, the Solstice Full Moon.

My residency began on the new moon. So I get to be there to absorb the energy of this special moon in its entirety. It is such a powerful thing.

For additional images and stories from my Rensing residency, you may visit my facebook page,
Re-enactment by Wanrudee
Posted by Rensing Center at 11:00 AM No comments: