A Writing Residency at Rensing Center in Pickens, South Carolina

Paulette Alden
Minneapolis, Minnesota
September 2015
A Writing Residency at Rensing Center in Pickens, South Carolina
This morning I woke to a voice in my head:

"They were the best and the brightest, you might say, and I looked up to them. They were seniors and I was only a sophomore but a couple of us were in the Youth NAACP together at Sterling. One day in March--this was in 1960--when we were having burgers at the Huddle across the street from school, Ben Downs told how he'd gone to Greenville Senior High to take the college entrance exam. He was a brain for sure, and later we'd learn that he had scored in the top 10% of the exam. All he could talk about that day was how he couldn't believe the difference between the library at the white high school and our little colored hole-in-the-wall library on McBee Avenue, which had mostly donated books and only a few reference books.  I could tell it was a harsh awakening for him."

If I had been at home, it wouldn't have been my character Priscilla (Pretty) Stone's voice I would have awakened to. It would have been my own internal monologue, running through the things I had to do that day, then my husband's voice, the voices on the radio or TV in the kitchen telling me the (bad) news in the world, then my dog telling me he needed to go for a walk  . . . 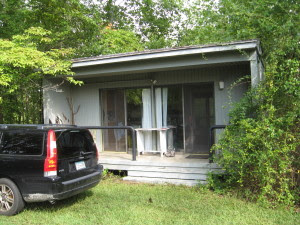 But here at Rensing this morning it was perfectly quiet except for a few bird calls out in the pasture or woods. I lay in bed in the one-room Guest House and looked at how the early light came through the white curtains across the sliding glass doors that front the cottage. I listened to Pretty begin to tell her me part of my novel.  I got up and began to write.

It meant everything that I had nothing to do all day, no one to see, nowhere to go, until our weekly potluck dinner this evening. Pretty was telling me how her friends, Ben, Dorothy, Hattie . . . had gone to the all-white Greenville Public Library later that March, been turned away, how they returned and were arrested, how the library board voted to close all the libraries, and how, under threat of federal action, reopened them in September on a non-discriminatory basis. Facts I had researched and interviewed participants about, and which I was now trying to bring to life in a novel via Pretty. 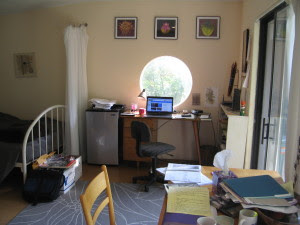 I spread out in the Guest House

I drove to Rensing from Minneapolis two weeks ago for a three-week stay here. I had been amazed to find a place in Pickens County, South Carolina that provided residencies for writers, artists, musicians, photographers, and environmentalists . . .  I had grown up in Greenville, 30 miles away. The novel I'm writing begins at the Pickens jail in 1947 when a mob of white taxi drivers from Greenville took a young black man, Willie Earle, from the jail where he was being held on suspicion of killing one of their own,  tortured a confession out of him, stabbed and beat him, and finished him off with a shotgun blast. The trial that took place in Greenville resulted in the acquittal of all 28 defendants by a white jury.

I began writing about the impact the lynching and trial had on four fictional characters. At some point it seemed to me the logical extension of the Willie Earle story  was to take the novel up to 1963, when the Supreme Court ruled in the landmark case Peterson v. City of Greenville that segregation in public facilities--like lunch counters--was unconstitutional.

You might say that Rensing was calling my name. Not only is my novel set in Pickens County and Greenville, I have deep roots in this area. When I catch glimpses of blue mountains when I drive these country roads, I feel I've come home. 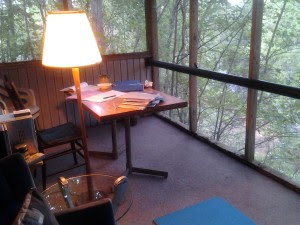 To me this is Rensing:  quiet and solitude; the Guest House with its screen porch; a palpable sense from Ellen and her mother Evelyn, who own and run the place, of nurturing the residents, promoting creativity, and fostering connection out into the wider world; the four Herefords and eight white Saanen goats whom I visit every evening in the pasture; the trail through the woods and along the creek overgrown with mountain laurel, the same kind of creek trail I knew at Table Rock Mountain where we had a cabin when I was growing up; three precious, rare weeks to immerse myself deeply in my novel in a way I can't do at home. I'm so grateful!

Rensing is not for everyone. If you're a party animal, don't come here. If you're freaked out by deep country, go elsewhere. If you need good restaurants, or even a pretty good one, Pickens won't do. If you want luxury accommodations, check into a hotel. If you need Trader Joe's or Whole Foods, they aren't here (and never will be).

But if you crave buckets of time; quiet like you've never heard before; compatible people both local and in residence who are interesting and enjoyable to be with;  a director who has spent her life as an artist and who has a vision of how to create a vibrant, creative, engaged community; four Herefords and a bunch of white goats--then Rensing is for you.

Adjustment & Discovery: Week one at the Rensing Center

Kristen Watson
Vermont
September 2015
Adjustment & Discovery: Week one at the Rensing Center
I arrived at the Rensing Center from my home in northwest Vermont last Sunday evening. I ended up having a choice of where to stay so I took the more secluded (no Internet) cottage nestled in the woods on the edge of the property. It's called the Pottery, because it was and still can be used in that manner, but also works well for other disciplines. It took a couple of days to get moved in and settled in my studio/living space. 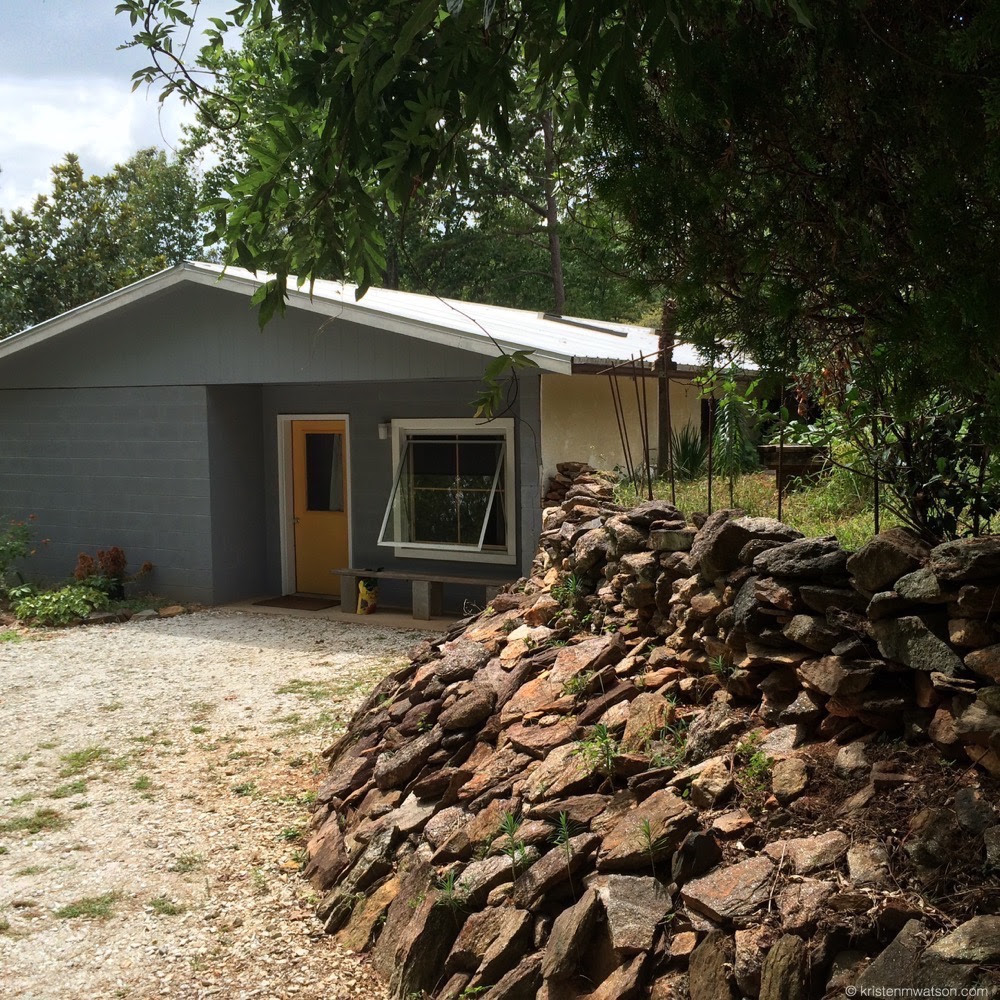 MY LIVING/WORKING SPACE: THE POTTERY, WITH TIERED VEGETABLE, FLOWER, AND OUTDOOR SCULPTURE GARDENS TO THE NORTH.
It's been quite an adjustment, in a good way. So many differences, both external (weather, flora and fauna, local customs, radio stations!) and internal (a completely open schedule- which means lots of time to think, observe, write, contemplate, and make). I've been experimenting with materials and thinking about several projects that I think will begin to take form in the coming weeks.
I've noticed that a residency of this length doesn't have the urgency to 'do' that shorter ones have, so it requires some structure or I'd while away the days just enjoying the other-worldly garden behind my cottage. So I've tried to apply a flexible schedule to stay open to inspiration but still setting some daily/weekly goals for myself. I was able to complete this first painting this week. I'm posting pics of works in progress on Instagram and Facebook, so if you're interested you can follow me there. To visit my website click on the image below or my name in the caption. 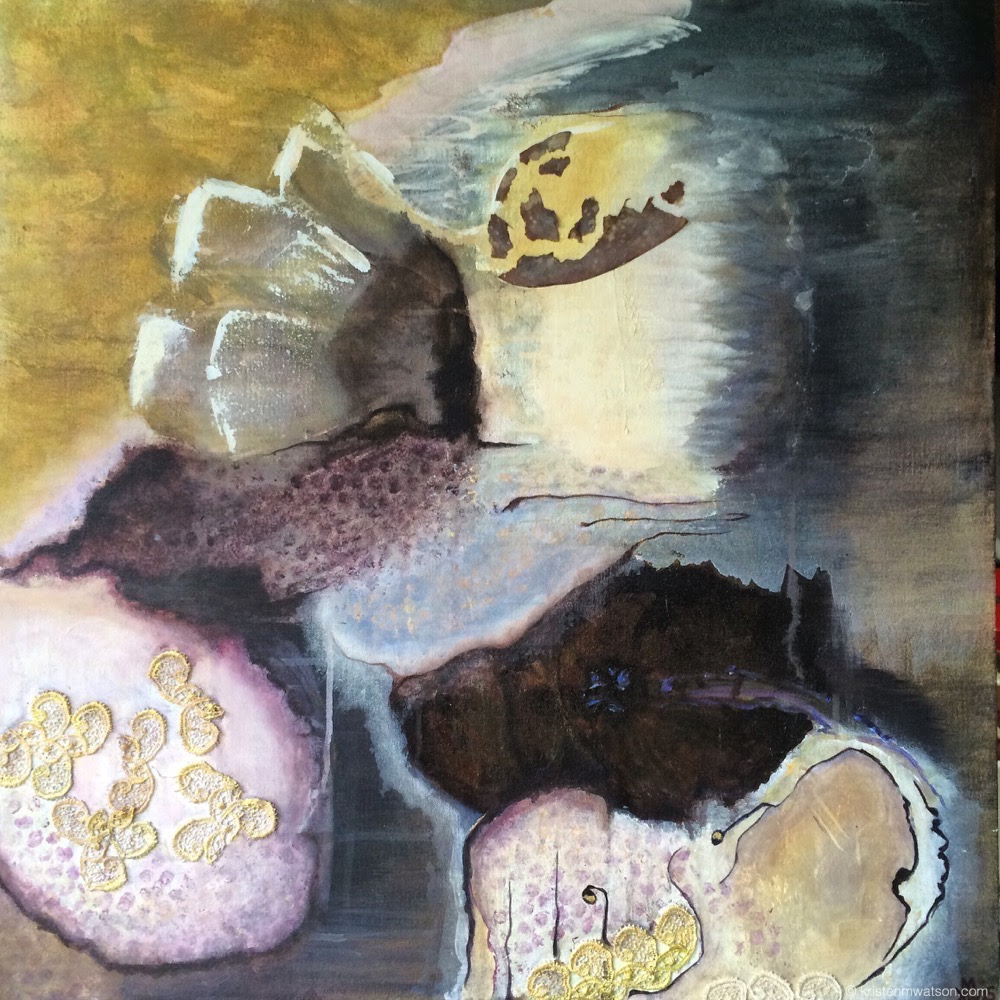 UNTITLED, 24 X 24", ACRYLIC AND MIXED MEDIA ON CANVAS. ©2015 KRISTEN M. WATSON
Mostly I'm just super grateful to have the time to let my mind slow down. I can feel it happening. It's crazy to think how fast-paced my life is in VT, and I'm reminded of the value of practicing Presence. So that's what this week has mostly been about. Of course I've also had some nice talks and shared meals with the other resident, writer Paulette Alden, as well as the Rensing staff and farmhands. Ellen, the founder and director of the Center, is a talented and recognized craft artist with a long and successful career before the Rensing endeavor began. She's also an accomplished gardener, community activist, and the voice of green living in Pickens. 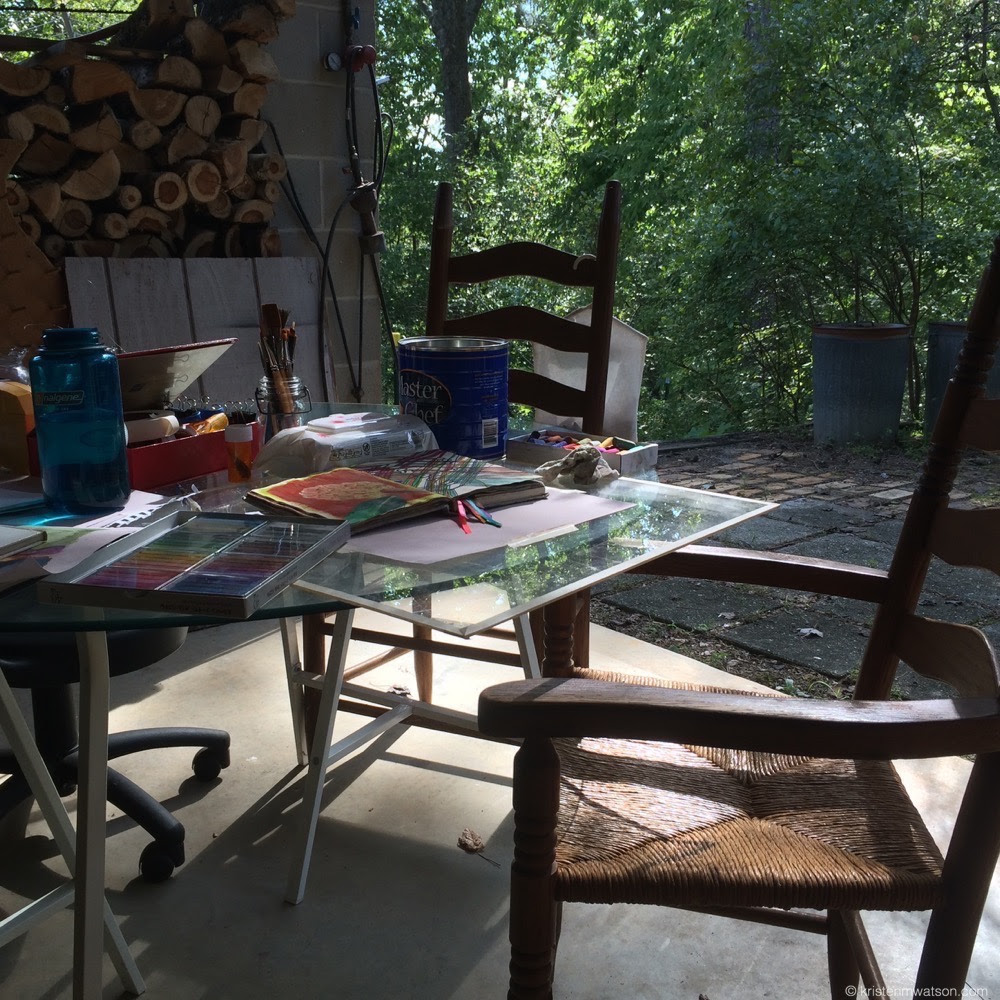 THE BACK PATIO AT THE POTTERY, RENSING CENTER, S.C.
Important learning this week: to walk outside in SC you must have a spider web stick to swing to and fro, up and down in front of you, unless you like a face full of webs. The spiders here are vast, varied, stunningly beautiful (I have a load of photos) and prolific and artistic web-builders. I keep a stick at each door to grab on my way out. :)