Since arriving at the Rensing Center two weeks ago, I have been of two minds. I’ve felt
that there is not enough time in life to do, learn, or excel at what I want. Then I’ve felt assured
that there is ample time, and that I don’t have to do, learn, or excel at anything. So, I sat here
immobilized by contradiction for two weeks. I’m kidding. But if I had, there would hardly be a
better place to suffer. The porch room in the Guest House is a lushly decorated, diverse world
unto itself. And there’s almost nothing in it.

In truth, I found myself trying out some new approaches, creativity-wise, taking up some
old ways, and continuing current projects. I won’t say I’ve been “inspired”—it’s too soon for
that (I am sitting in the porch room as we speak. Let’s not jinx it.) I will say “allowed.” I have
been granted a permission. I’ve continued to write and revise poems—the medium that landed
me in this gorgeous place (thank you to Emrys Press and to Rensing for the collaboration). I’ve
also worked on a personal essay, a genre I’m drawn to but haven’t indulged in for a long time.
And—this is the weird one—I made some visual art. Maybe beauty, or a way of looking at the
world that feels beautiful, is contagious. “Beautiful” is not the word for what I made, but it
accurately describes how it felt to make it.

I had a stack of photographs along with me that I’d rather not have had. My father died
this past March, three months ago. I live in Chicago. He lived in Knoxville. His wife, my sister,
and I decided that I would get the car. So, when it came time to visit Rensing, I flew to Knoxville
and drove his car—listening to his cds—with a stack of his photos, his old badges (he was a
lifelong police officer), and his copies of my childhood writings, packed in the backseat.
In the evenings here, I started going through the photos, setting them next to each other in
odd combinations. I liked how, if I placed one over another, it was like installing windows into a
portrait. Bombed out, vacated windows. The two photos in the frame that are not my sister and I
are photos my father took in Bosnia in the mid-nineties. He was there for about a year, working
as a peacekeeper for the United Nations. Their purpose was to mitigate the violence between
warring ethnic groups, as well as to conduct investigations—including the excavation of mass
graves—into the ongoing genocide. His departure for Bosnia had come on the heels of my
parents’ separation. First he left home, then Michigan—our home state, then the country. 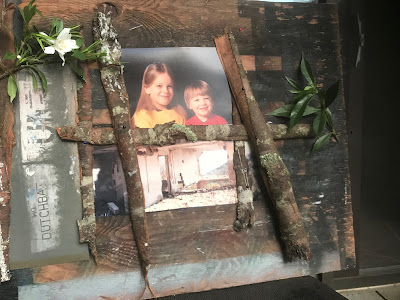 We had a good relationship, though. He was a dedicated father, even from a distance.
Plus, he did all of his leaving respectfully. It’s this final leave-taking that feels like a bombed-out
window.

The other elements in the frame, for me—for a few reasons—bring levity. Nature has
held my attention since arriving at Rensing. The mosses and lichens here instill a cozy sense of
the well-worn. A hike in these woods can look—in color—like the statue gardens of Europe:
green verdigris, beech bark like marble or cement, and the darker, furrowed browns of trellises. I
found these strips of speckled bark—perfectly flexible due to three days of rain—laying by the
side of a trail, at the foot of a white pine (Michigan’s state tree). The blossom and leaves are cut
from the gardenia in front of the Guest House. I’d never looked at a gardenia and known that’s
what I was looking at before. And yet, the street we lived on, for the first nine years of my
sister’s life and the first five of mine, was Gardenia. That family room filled with light in the
morning. I can remember basking in it while watching cartoons with an enormous, orange,
corduroy pillow. We were happy there.

I suppose that if we feel like there is not enough time in the day, it’s partly because we
have—at some point in the past—realized the rich potential of that time. Like a child too thrilled
with summer to go willingly to bed, I’ve been staying up late here. It’s well-past dark now and
something—a porcupine, a raccoon, a deer, Godzilla—is tromping around in the leaves below.
The bullfrogs, too, refuse to give in.

We have the photo, but the picture is changing. As I knew it would, the bark is drying up
and curling away from the frame. The white blossom has already yellowed and withered. The
leaves hang on a while longer. Does that sound maudlin? Not everything is a metaphor! I’m
aiming at description. I wanted to make something ephemeral, something temporary. It just felt
right.

Thank you, Ellen, Evelyn, Ron, & Jon for the allowance.
Posted by Ellen Kochansky at 4:44 PM No comments: