I wasn’t at the Rensing Center for very long—my residency was interrupted by a death
in the family—but my time there was quite special.

For the first week, I got to live and work in the Guest House, which was spacious and
comfortable, with a terrific porthole bubble window, a large screened-in porch, and
fantastic, southern-style air conditioning. I was getting so much done that I was set to
finish the work on my novel early and would have time for another project.

That first Sunday night dinner at Ellen’s house really set the tone. Everyone was so
friendly. I discovered that Evelyn, Ellen’s 99 year old mother and a force of nature, grew
up just minutes from where I live in Brooklyn. Ron made excellent pimento cheese. We
chatted for hours, and I had the unusual and quite pleasant experience of not being the
only gay man at a residency- apparently Rensing attracts many local LGBT folk as well
as residents.

The next Saturday Ellen graciously took me to the Mill where there was a banjo festival
going on. Both the mill and the festival were so charming, Later that afternoon we went
to Mabel’s Fish Fry at the baptist church, home to one of Appalachia’s oldest African
American communities. While there, Roosevelt Aiken gave us a tour of the old cemetery. All of it was eye opening and such a treat – I was particularly excited to learn about the area's history.
And that southern hospitality and food- it can’t be beat. 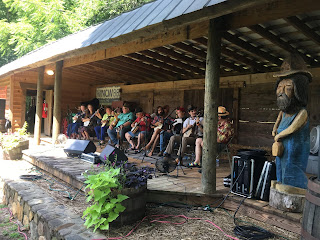 I didn’t know that I would be coming back at all after my residency was interrupted, but
I decided that since I would be driving north from Miami anyway that I might as well go
back. I felt so comfortable there, and was eager to see everyone again. This time, I
stayed in the Forge—another great space behind the library.

The next six days flew by. We had another excellent Sunday night dinner. I found a
gorgeous copperhead snake (dead- I’m not crazy) on the road, and the next day I found a
box turtle at almost the same spot, who I took back to the apartment and tried to feed.
Once I realized he was having none of it, I released him back into the woods. 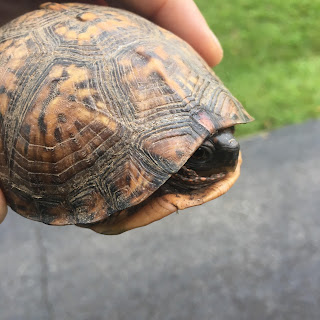 On the night before I left, Ron took us all to Greenville. Ellen insisted we go, and I was
glad she did. So charming! The waterfall and bridge are picture-perfect, the town is
adorable and green, and they have a great bookstore and many restaurants.

Rensing is terrific. I love it when I get to go t a residency where I can not only be
productive but also immerse myself in the local culture. And to have such a charming,
warm and caring host as Ellen is just the cream on top of the (peach) pie! 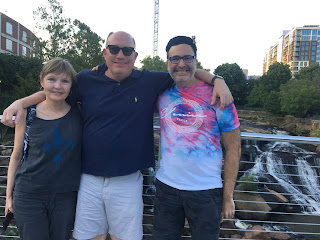 Posted by Rensing Center at 5:07 PM